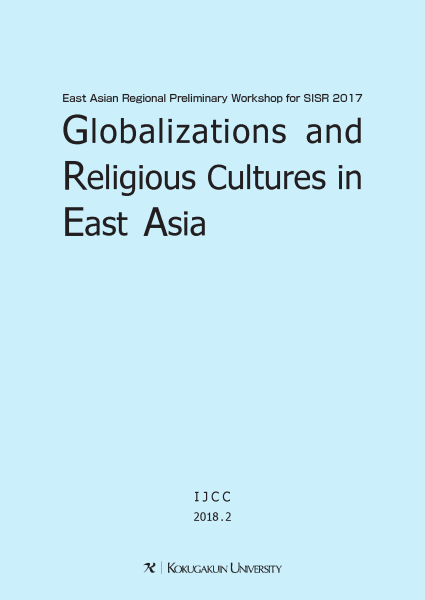 A report of an international workshop, “Globalizations and Religious Cultures in East Asia” held October 15, 2016.

“How Can an Oracle Become a Public Affair?: The Case of Study of Oshira-sama Shrine in the Tsugaru Area” by MURAKAMI Aki

“Influence of Secularization On Subjective Well-being in Japan: Secondary Analysis of “Japanese
Consciousness Survey” Conducted by NHK” by SHIMIZU Koki

“Bosogaku: Praying for Prosperity in Modernizing Japan” by TOISHIBA Shiho

“The Taiwanese Church and the Taiwan Independence Movement: Recent Tendency and the Context of After WW2 in Taiwan” by FUJINO Yohei

“Seeking for the ‘Safe Living Land’ for the Dead among the Urban Migrants in Japan: from the Research Study of the Nishiamuro Village Grave Yard in 2016” by TAJIMA Tadaatsu

This workshop held October 15, 2016, at the Kokugakuin University Academic Media Center was convened as a preliminary gathering to the International Society for the Sociology of Religion (ISSR) (Société Internationale de Sociologie des Religions, SISR) conference originally slated to be held in Melbourne in 2017.

The workshop had two objectives. First, it was meant to serve as an impetus that would encourage younger scholars from Japan and elsewhere around East Asia to attend the larger conference held in the Asia-Pacific region. Second, given that making a presentation in English for the first time at one’s first international conference can be a high hurdle to jump for some, it was thought that holding an international workshop in Japan would provide an opportunity to gain some practice. Moreover, it would also provide the chance to get accustomed to discussion in a foreign language with half the attendees being from other countries.

The preliminary workshop managed to achieve its objectives. The 34th ISSR Conference eventually held July 3-7, 2017, in Lausanne, Switzerland, included 13 participants who came from Japan, 3 from Taiwan, and 6 from Korea. The venue for the conference was abruptly changed due to unavoidable reasons at the original sponsoring institution. More than a few younger scholars abandoned plans to attend owing to the resulting increase in transportation and lodging costs. Still, we were delighted to see that some of the individuals who attended the preliminary workshop here at Kokugakuin did manage to attend the actual conference.

Incidentally, the advance notices for this workshop also overlapped with an International Conference Preliminary Workshop professors Hirafuji and Sakurai held as part of the Japanese Association for the Study of Religion and Society’s Annual Congress that took place June 15, 2016, at the Joetsu University of Education. It should be noted that the professors explained about the ISSR and issue a call for participants for this workshop while also delivering a lecture about how to make academic presentations in English.

It is our hope that younger scholars will make their presence felt globally not just in the field of religious studies, but also more broadly in the humanities and social sciences. Specifically, we look forward to seeing them participate in international conferences along with international workshops held in Japan, submit manuscripts to international journals published in foreign languages, and engage with global research networks. The first step toward achieving these lofty goals is participation in international scholarly conferences. How does one put together a 20-minute long presentation in English? How do you deal with a 10-minute question and answer period? The more actual experiences you have the more confidence you have in yourself, and the better you can engage in friendly research exchanges with your peers overseas. Seeing large numbers of younger researchers accumulate experiences of this sort from early in their careers would be most desirable.

Research that will win international recognition is not something that is done only by certain specific researchers at certain specific institutions. The breadth of the population of researchers itself is necessary for internationalizing the research standards of academic society. The policies of Japan’s Ministry of Education will create strategic hubs, but as the academic world we want to aim for the training of human resources itself.

The articles collected in this report are a milestone for the younger scholars who authored them, but that first step is a crucial one. It is a first step that anyone can take.

Finally, a word on the structure of this report. This volume comprises two sections, one of papers and the other of abstracts. The people who presented at the workshop were sounded out about submitting their papers. We received five of them in the end; these comprise the papers section. Abstracts for those papers the full versions of which we have been unable to present for various reasons including publication in other venues are collected in the section of that name.

Both the preliminary workshop and the publication of this present volume were made possible with funds from the Institute for Japanese Culture and Classics, Organization for the Advancement of Research and Development, Kokugakuin University, and a Japan Society for Promotion of Science Grant-in-Aid for Scientific Research (B) project title: “A Regional Comparative Study on Government-Religion Relations and the Formation of a New Theory of Public Religion in Asia” (subject number 16H05712) (project representative: Sakurai Yoshihide). The workshop also received support from the Japanese Association for the Study of Religion and Society.