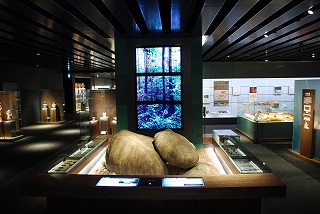 A reconstructed model of the Yamanokami Ruins

This Center was established to handle one part of the functions of Kokugakuin University Museum and to take on the responsibilities of its predecessor, the Archeology Showroom, which was established in 1928. The Kokugakuin Academic Resource Center gathers archeological and anthropological materials, and conducts research and studies mainly on ritual sites, in the aim of investigating the position of the cultures of the Japanese islands in the world, as well as the origins and development of those cultures.

Through the permanent exhibitions of the Kokugakuin University Museum, it is possible to get a historical and overarching view of archeological resources from the Paleolithic era in Japan up until early modern times. Please also take a look at the portion of the collection that is available for viewing in Kokugakuin University’s Digital Museum.

From the Kokugakuin Academic Resource Center (Museum of Archeology Gate)

The materials held by this center are on display in the Kokugakuin University Museum (Shibuya Campus). We look forward to welcoming you to view the materials soon.

The Kokugakuin University Museum was founded when Dr. Kiyoyuki Higuchi, then an undergrad student, donated approximately 4,000 archeological resources collected in Nara Prefecture to the University in April 1928. Originally, the Museum was called the “Archeological Showroom,” and was housed in a small area of approximately 30 square meters. In 1932, the materials were moved from the library to the National History Research Office, and renamed the “Archeology Museum.” Dr. Kiyoyuki Higuchi, at the time a research assistant, took charge of the museum, laying the foundation for the museum organization that we have today. The museum at that time was a center within the Ancient Culture Association founded by Dr. Ryuzo Torii (which later became the Kokugakuin University Archeological Society), and was a gathering point for archeology students who would later go on to join the Inyukai alumni association. The “Museum Chorus” written at that time is still sung today by Archeology students in the Archeology Department of the Faculty of Letters and the University’s Literary Research Department. In 1952, the Office was recognized as a facility equivalent to a museum by the Museum Act. As a result, a system was established within the University to allow students to learn what they need to know about museums for the curation courses required to obtain art curator licensing. In addition, in 1975, the Office was again renamed as the Museum of Archeology.

As part of commemorative events for the 80th anniversary of Kokugakuin University, the Shinto Museum was established in May 1963. This was renamed as the Shinto Resource Exhibition Hall in 1978, and again as the Shinto Museum again in 1990. This facility has not only plays a role as a research and education organization for the Department of Shinto in the Faculty of Letters (currently known as the Faculty for Shinto Studies) and the Kokugakuin Literary Research Department, it also works to promote and publish resources related to Shinto.

At the time of the expansion and reorganization of the Japanese Culture Research Center into the Organization for the Advancement of Research and Development in 2007, these two buildings were merged into the Academic Museum, a shared use research organization within that Institute, signaling a new start for each organization. In 2008, they were moved to the completed AMC building in Jobanmatsu. Over the course of this long history, the Kokugakuin University Museum has developed a collection of 10,000 items. Many of those are now on display in the Museum in the archeology and Shinto sections.

For an overview of archeological research at Kokugakuin University and a history of that research, including the activities of this Center, please see the following link.

December 1952 – Designated as a facility equivalent to a museum.

July 1960 – Museum moved to the second floor of the library.

August 1965 – Collection established on the ground floor of Jobanmatsu Building 1.

April 1980 – Along with the new construction of the library collection archives, second and third archives, as well as new office established.