As a successor to the Research Institute for the Japanese Classics, Kokugakuin University has adopted the principles of Shinto as its founding principles. It goes without saying that the development of research on Shinto is necessary in order to master the principles of Shinto. The Shinto Museum advances its own Shinto research while also collecting, exhibiting, and publicizing academic resources that can contribute to that research. It aims to support research on Shinto both inside and outside of the University.

From the Shinto Museum

The collected materials of the Shinto Museum are on display in the Kokugakuin University Museum (Shibuya Campus). We look forward to your visit to view this collection someday soon.

The Shinto Exhibit in the Kokugakuin University Museum periodically switches out and in different portions of the materials held by the University.

This electronic publication is a selection of the portions of Toto Saijiki(a manuscript in the Shinto Museum collection) that discusses Shinto Shrines still extant in Tokyo today. It includes a full transcription of the original text within each section. We hope you will take a look at it.
The creation of this electronic publication was made possible by a generous donation from the Tokyo Branch of the Kokugakuin University Alumni Association of Shinto Priests.

An Overview of Japanese Enthronement Ceremonies, Based on Ancient Documents, Forcusing on Daijōsai

Expressions of Gods and Festivals 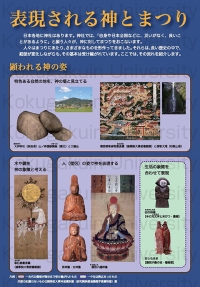 This 4-page book explains all about the items that are honored and used in Shinto shrines and festivals. Please feel free to view it via the following link.

The Shinto Museum is the successor of the Shinto Reference Office that was established in May 1963 as a commemorative project for the 80th anniversary of the university. Since the founding of the Shinto Museum, the organization’s work has centered mainly on its collection of materials related to festivals and rituals, including gathered materials on ceremonies from the Research Institute for the Japanese Classics.
This organization was renamed in May 1978 as the Shinto Reference Showroom, and then again in April 1990 as the Shinto Museum.
In April 2007, the Shinto Museum was merged with the Museum of Archeology, become a subdivision of the Academic Reference Library (renamed the Academic Resource Center in 2013), itself a part of the Organization for the Advancement of Research and Development.
Currently, the Shinto Museum holds a collection of resources on festival tools, costumes, and ancient texts related to the festivals and rituals of Shinto.