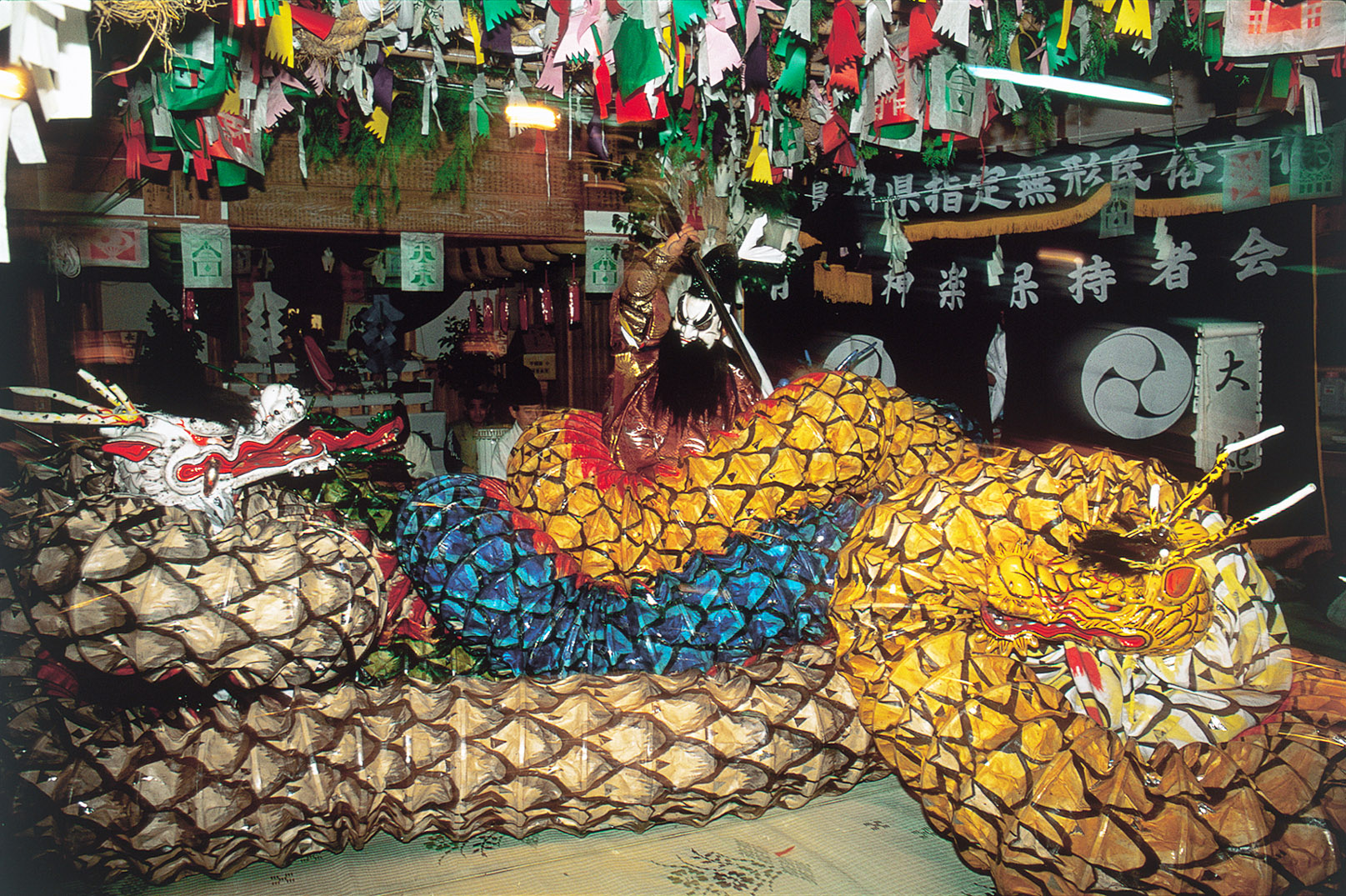 Yamata no Orochi — Part of the program of Iwami Kagura (a sacred Japanese dance and music ritual dedicated to the gods of Shinto) in Shimane Prefecture depicts the scene of Susanoo defeating the giant snake Orochi.

Snakes frequently appear in the myths of the world. There are many monsters whose bodies are composed partly of snakes, with the hair of Medusa in Greek myth being one vivid example. Fukugi and Joka, who in Chinese myth are considered to be our ancestors, are drawn as figures having human heads on snakes’ bodies. Then snakes in the Christian religion are considered to be the incarnation of evil that brought human beings to original sin.

Snakes, which repeatedly molt, are symbols of death and regeneration. While they are worshipped as gods all over the world, people regard them with fear because they bring misfortune to human beings with their horrible poison. Worship and fear are two sides of the same coin.

A snake myths that appears in the Kojiki

Yamata no Orochi, slain by Susanoo, is also a god that is depicted in the form of a snake in the Kojiki. This myth is classified as a Perseus-Andromeda type myth, a classification based on the Greek myth in which a hero called Perseus slays a monster to save a maiden called Andromeda. This type of myth exists all over the world.

It is said that Yamata no Orochi has eight heads and red eyes like a ground cherry plant. Moreover, cypress and cedar trees grow on its body. Its length is equal to eight valleys and eight mountains. This monster is especially massive and eerie. In the Kojiki many gods have a variety of shapes. Why is Yamata no Orochi depicted as such a huge figure?

“Why is Yamata no Orechi described as a scary figure?

Susanoo went down to a place called Torikami Mountain located in the upper reaches of the Hinokawa river—it is currently called the Hiikawa—in Izumo. He slayed Yamata no Orochi when he went further upstream. The Hinokawa is the river that flows through west Izumo and conferred favor on people living there, who held it in awe. Yamata no Orochi can be regarded as a deity that personified the river because monsters in world myths are often described as symbols of natural wonders that human beings cannot control.

Maidens that were eaten by Yamata no Orochi every year were offered as sacrifices to a god to suppress the river flooding. A framework of the myth might be that the relation between the gods and the maidens which had been repeated every year in Izumo was destroyed and a new order was created by the hero Susanoo.

The serpentine river reminds us of snakes. Ancient people may have feared the river, representing it as the huge snake god and worshipped it.