On Oct. 12, foreign students of Kokugakuin University visited Meiji Jingu shrine(明治神宮). Meiji jingu shrine is located in a forest that covers an area of 70 hectares (170 acres). 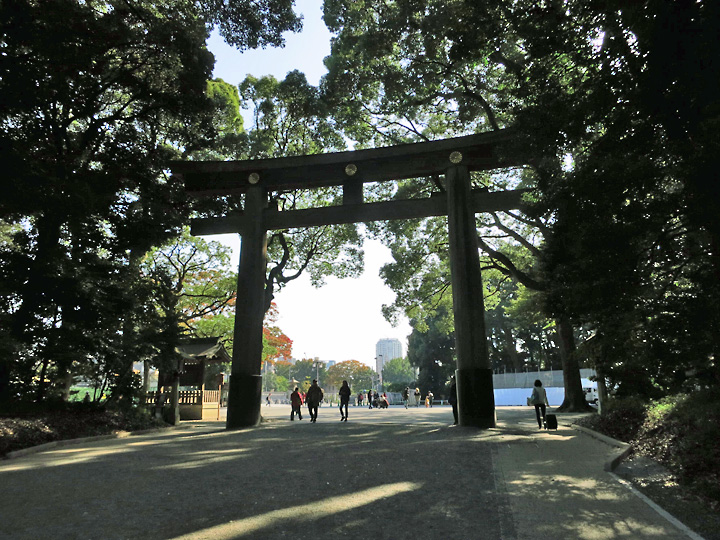 Q.It’s amazing that Meiji Jingu shrine is so rich in greenery, despite being in the middle of Tokyo’s bustling metropolitan area. Is there a particular reason for that?

The Meiji Jingu shrine forest we see today was created with trees donated from all over Japan as a symbol of veneration for Emperor Meiji (1852-1912) and his consort Empress Shouken (1849-1914) shortly after they passed away – their tombs are located in Kyoto. The artificial forest was designed by silvicultural doctor Seiroku Honda and the trees planted by hand by young men’s corps members gathered from every corner of the country. The shrine complex was completed in 1920 and is rich in biodiversity with a natural water spring on its grounds.

During the Meiji period (1868-1912), foreign teachers and engineers who were invited to help Japan modernize are said to have been highly impressed by the greenery and beauty of Tokyo. The capital’s lush greenery dates back to the Edo period (1603-1867) for two reasons – the presence of regional daimyo feudal lords in Edo, which became Tokyo in 1868, and the practice of creating elaborate miniature landscapes.

The first reason was related to the Tokugawa shogunate’s order for daimyo to show their loyalty by having their wives and heirs live in Edo indefinitely as de facto hostages. Each daimyo therefore built spacious residences in Edo. with magnificent gardens. At one time, such homes occupied about 70 percent of Edo’s residential areas. As these daimyo houses were not allowed to have arsenals, save self-defensive weapons such as samurai swords, regional lords opted to spend lavishly on the arts and culture, including the creation of beautiful gardens.

The second reason was the popularity of viewing miniature landscapes in gardens, replicating a whole river system from the fountainhead to the sea while also incorporating the mountains and other natural scenery from the landscape surrounding the estate.

In Japan, it is traditionally said that when you choose a person to marry, you should take a look at the flowers planted in their garden. People whose gardens are tended with great care are thought to have caring hearts.