On Sep 28, foreign students of Kokugakuin University visited The Metropolitan Edo Tokyo Museum(東京江戸博物館), a museum which informs about the past and present of Tokyo. 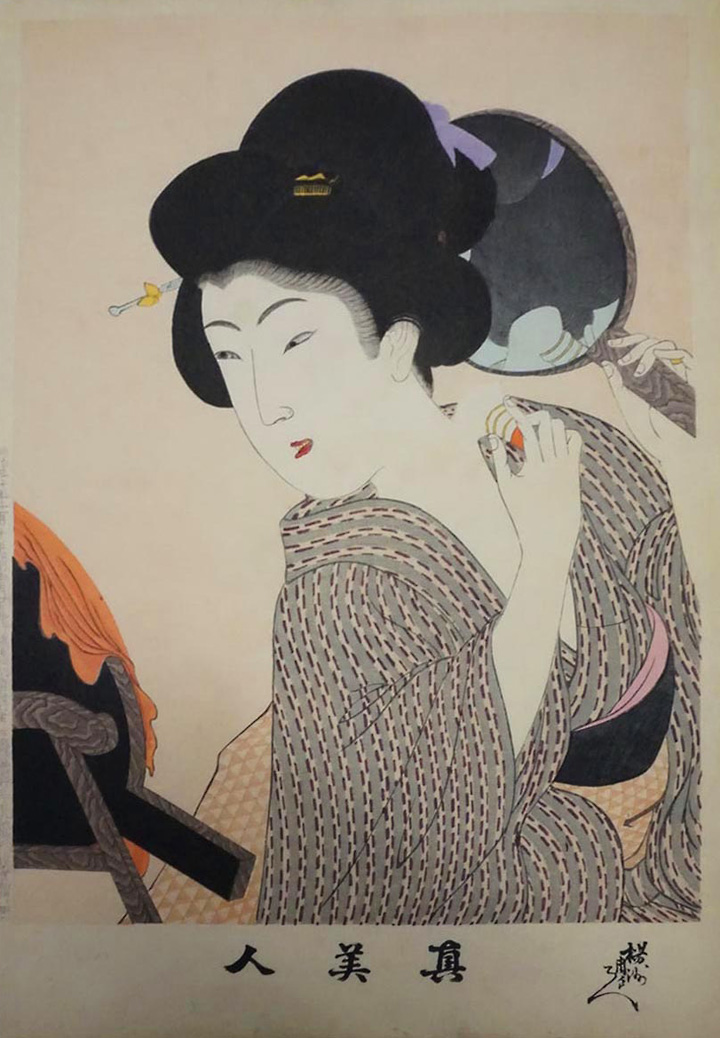 Q.Why do the faces of women in Japan’s bijinga paintings look mostly alike? Also, why are they drawn at a 45-degree angle?

Bijinga is a genre of ukiyo-e with three distinctive features. First, bijinga paintings show portraits of women with what people in the Edo period (1603-1867) commonly considered an ideal facial appearance. Second, women drawn in bijinga wear beautiful attire that was either traditional or in fashion at the time. Third, women in bijinga assume feminine postures.

Incorporating all these elements, bijinga artists created their works primarily to satisfy buyers’ needs to see what people regarded as the ideal woman. As a result, many bijinga portraits have little individuality, showing no emotions, except for certain works depicting specific figures. Thus, many of the women in bijinga look alike. Why do traditional Japanese paintings feature people, male and female, with the upper parts of their bodies posed diagonally at an angle of 45 degrees? There are three reasons for this as well. First, it is generally said that the facial features of Japanese people are less pronounced than those of Westerners. Therefore, it is rare to see bijinga with the faces in profile, as often seen in Western paintings.

Second, Japanese artists of the past depicted stereoscopic images differently from their Western counterparts. There are therefore a limited number of Japanese paintings that are front-facing portraits, which would make the faces look increasingly flat. The third reason, which is my personal view, could be that Japanese society considered it refined to look at things from the side instead of the front – I think this tendency influenced the bijinga techniques.

People today may doubt that our ancestors really had the kind of facial appearance shown in bijinga and find it difficult to agree that the women in bijinga look beautiful. Bijinga paintings are a collection of works in which the artists created their own idealized “faces of the era,” after researching people’s artistic preferences and needs. By the same token, people in future generations – a few hundred years from now – may feel something is different or strange about the figures that appear in today’s comics and animation.

Yamato-e and the Reception of Rinpa in Ukiyo-e; Moronobu,Harunobu,and Hokusai（2014/05/30）