Red in believed to protect people from evil 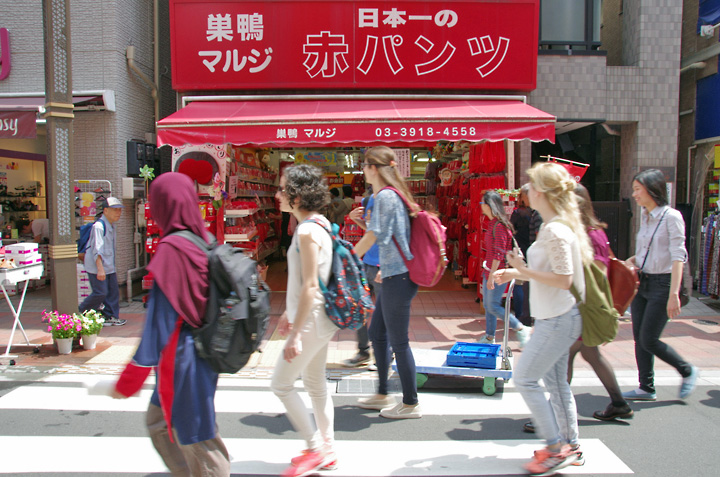 Q.At Sugamo in Toshima Ward,Tokyo, a lot of red underwear is on sale. Does this have any particular meaning?

A.Red is believed to protect people from evil

Since ancient times, people in Japan have regarded red as the color that denotes the power of the sun and that of blood – the power to protect humans from evil and harm. Therefore, some people put on red underwear to gain spiritual empowerment and encouragement.

Red underwear sold in the Sugamo Jizodori shopping area near Sugamo Station on the Yamanote Line is particularly popular among visitors, who regard it as a sort of lucky charm. Red underwear is said to be especially popular this year because it is the year of the monkey. The word monkey is “saru” in Japanese, which has the same sound as “saru” (go away), as in the sentence of “Byoki ga saru” (literally, “Diseases will go away”). Therefore, elderly people who want to remain healthy opt to put on red underwear in the year of the monkey.

Aside from red underwear, the Japanese wear other red clothing to gain power. For example, people wear a red sleeveless garment, chanchanko (a type of vest) and red hoods when they celebrate their 60th birthday, as it coincides with the completion of the sexagenarian cycle of the Chinese zodiac calendar since their birth. Wearing red things on such an occasion implies that they are “reborn” as “akago” (red babies) and they have made themselves immune to evil.

Likewise, the Japanese have a tradition of eating bowls of azuki gayu (red bean gruel) on the winter solstice and in mid-January, which are known as “little New Year” days, to express their desire to get as much energy and warmth as possible from the sun. Since ancient times, red has been favored in Japan as the color of good luck.