The Faculty of Shinto Studies

The Educational Research Objectives of the Faculty of Shinto Studies

The objective of the Faculty of Shinto Studies is to educate people to make a sound contribution to society by contributing to development of an internationalized, modern information society, through understanding and learning about Japan’s traditional culture with a focus on Shinto, and analysis and comparison of religious teachings and related religious cultures inside Japan and abroad.

The Three Policies of the Faculty of Shinto Studies

We foster Shinto practitioners and members of society who have the perspective to make a creative broad contribution in Japan and internationally, through a deep understanding of Japanese culture and society with a focus on Shinto, and who learn about various religious cultures in Japan and abroad. Students who complete the curriculum that has been formed to achieve the objectives above, and who earn the set number of credits are awarded the Bachelor of Arts diploma.

Diploma that can be earned: Bachelor’s (Literature)

The objective of this Faculty’s curriculum is to provide a deep understanding of Japanese traditional culture with a focus on Shinto, and an understanding of Japan’s culture and society through comparative research on religious cultures within Japan and abroad. For that purpose, we have set up two courses, the “Shinto culture course” and the “Religious culture course,” and have formed a curriculum wherein students attend consistent seminar lectures with a small number of students from the time that they enter the University until they graduate. Based on that, both teachers and students can have a reciprocal high quality learning experience, fostering people who can make a sound contribution to society by contributing to the development of an internationalized, modern information society.

Based on educational implementation policies of this School and this Faculty, we widely recruit and accept students such as the following: 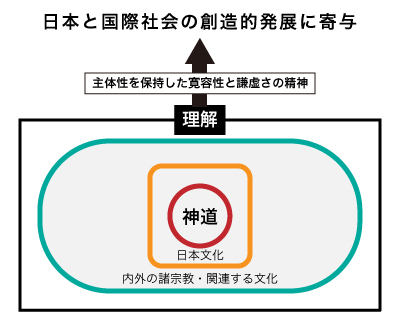 Features of the Faculty of Shinto Studies

Education at the Faculty of Shinto Studies has the following features.

During regular courses in the Faculty of Shinto Studies there are many opportunities to learn about the culture that took root in Japan. In order to better understand this in practical terms, there are events that have been set up to give you the opportunity to “experience” Japanese culture.

The courses other than Ice break are optional, but you can see students engaged in positive activities in any of them.
In addition to these, there are opportunities to participate in groups both inside and outside the school such as volunteer activities to help support regions that suffered in the Great East Japan Earthquake and tsunami.

Principles and Objectives of Establishment 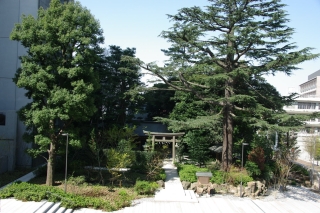 The principle of the Faculty of Shinto Studies is to promote research and education that can make a contribution to the development of sound education of religious culture in society in Japan and abroad, and deepening comparative understanding of the awareness, roles and functions of Japanese traditional culture with a focus on Shinto, the traditional religion from Japan’s ancient past, and of religions in Japan and abroad, and their related religious cultures.
The Shinto department inherited what has been the mission of this University since it was founded, which was represented in the pre-war system Shinto department by “fostering promising Shinto priests through academic research and teaching,” and which continues to this day. On the other hand, in the post-war period the University planned to set up and expand its education system in response to the new age of expansion of the Faculty of Letters and the establishment of the Faculty of Economics and Faculty of Law.
This was an appropriate measure in response to post-war social conditions, and we can judge that corresponding results have been achieved, but meanwhile the pre-war way of learning (basically a college with only a Faculty of Letters) Japanese traditional culture and historical culture, in other words the consciousness of learning subjects in order to become Shinto priests, caused difficulties for the maintenance of an interdisciplinary curriculum and education system. Now, what is being required of the University is to once again realize an interdisciplinary curriculum and education system that are appropriate to the present times, and to build an educational environment where anyone studying at this University has an equal opportunity to learn subjects and foster the spirit according to the motto of the University, “Shinto mind.” In other words, The Faculty of Shinto Studies was established with the objective of fostering people who can keep the “Shinto spirit” and contribute to the formation of a better nation and society with re-recognition of the traditional Japanese culture that breathes in modern society based on the principle of the University’s motto, and education and research of “the spirit of tolerance and humility while maintaining a sense of self-identity.”
Shinto has a long history as the roots of Japan’s traditional culture, and at the same time that it is a religion, it is also a standard for living, folkways and customs, with little consciousness of it as a religion. The mission and objective of the Faculty of Shinto Studies is to foster and be able to produce in succession people who can contribute to the formation of a peaceful and sound society and nation, who can appropriately judge the significance and role of religion in the modern international information society, deepening their understanding of tolerance and intolerance in religions, including Shinto, by gaining knowledge of religions and religious culture in Japan and abroad along with systematic studies of this dual nature and ambiguity of Shinto, and further the diversity that Shinto has.